A TRIP TO QUEBEC, CANADA – DURING THE MOST WONDERFUL TIME OF THE YEAR 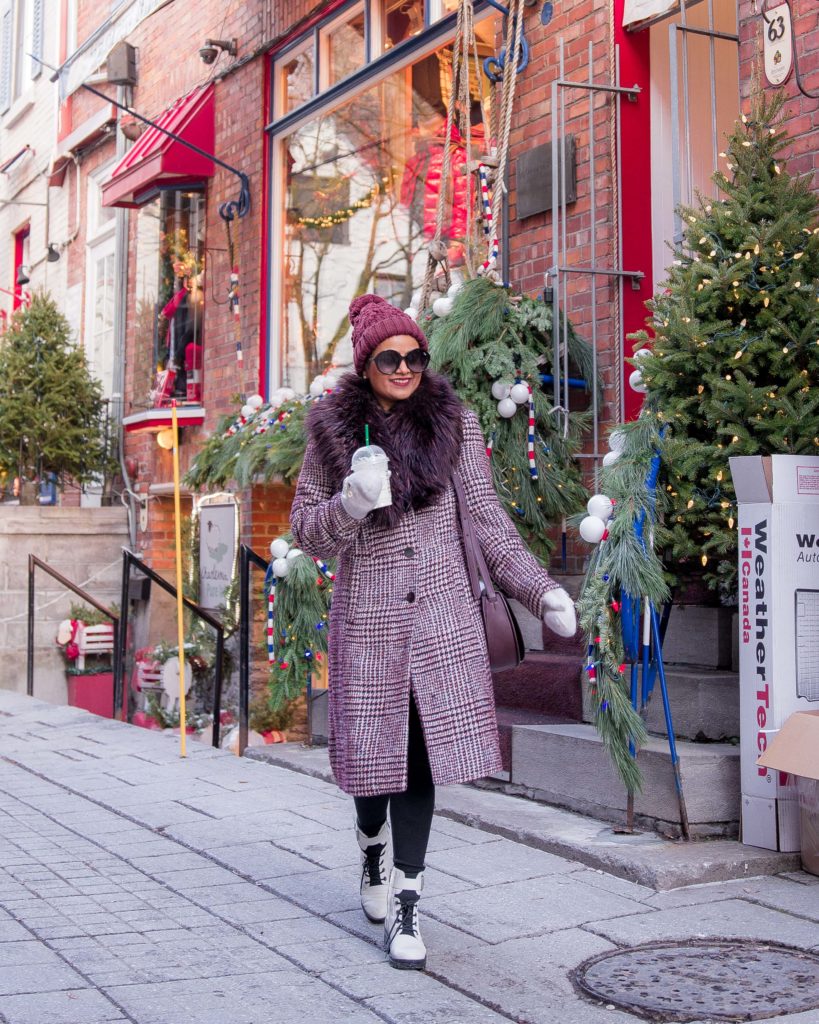 I am finally sitting down to recap our trip to Quebec  – and let me start by saying that it was amazing. Everyone kept asking why we chose to go to Quebec this time of the year ( late November, close to Thanksgiving ) because it is so cold – but based on the pictures and what I had read online, Quebec is supposed to be a winter wonderland. And wonderland it was ! It was like a set from a holiday movie ( I am a huge fan! ) – imagine every store being decorated, snow dusted cobble-stone streets, skating rinks in the town square, Christmas markets, fireplace roaring in cafes, hot chocolate signs everywhere … I mean – at the cost of sounding cliché – it doesn’t get more magical than that. 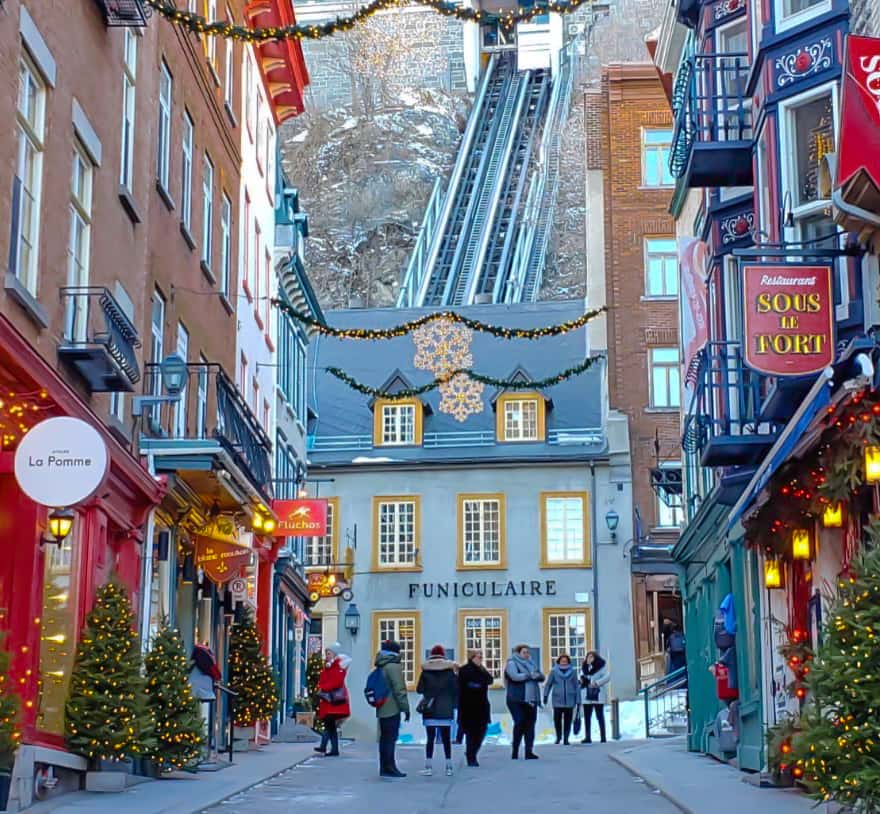 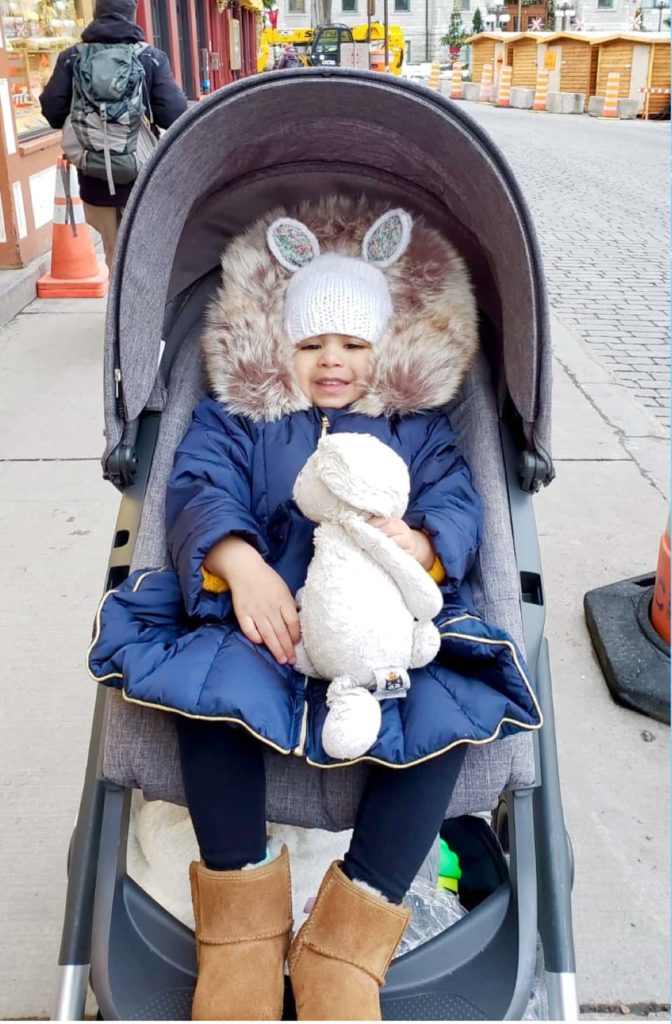 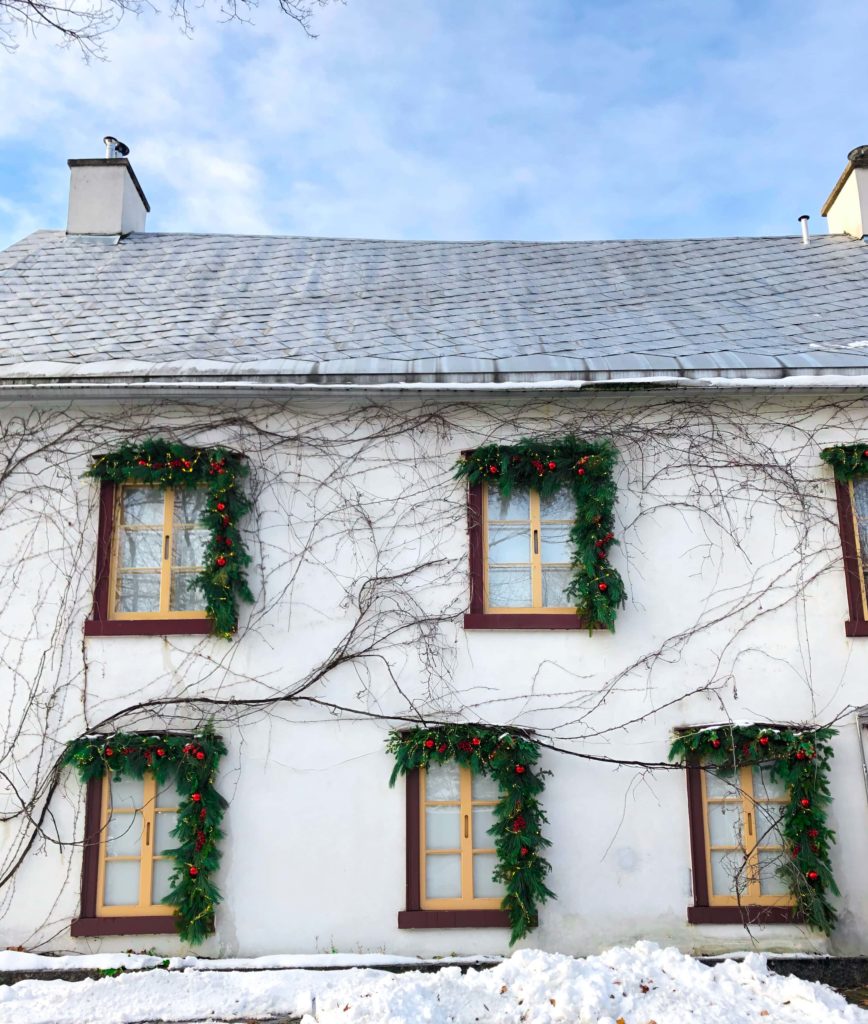 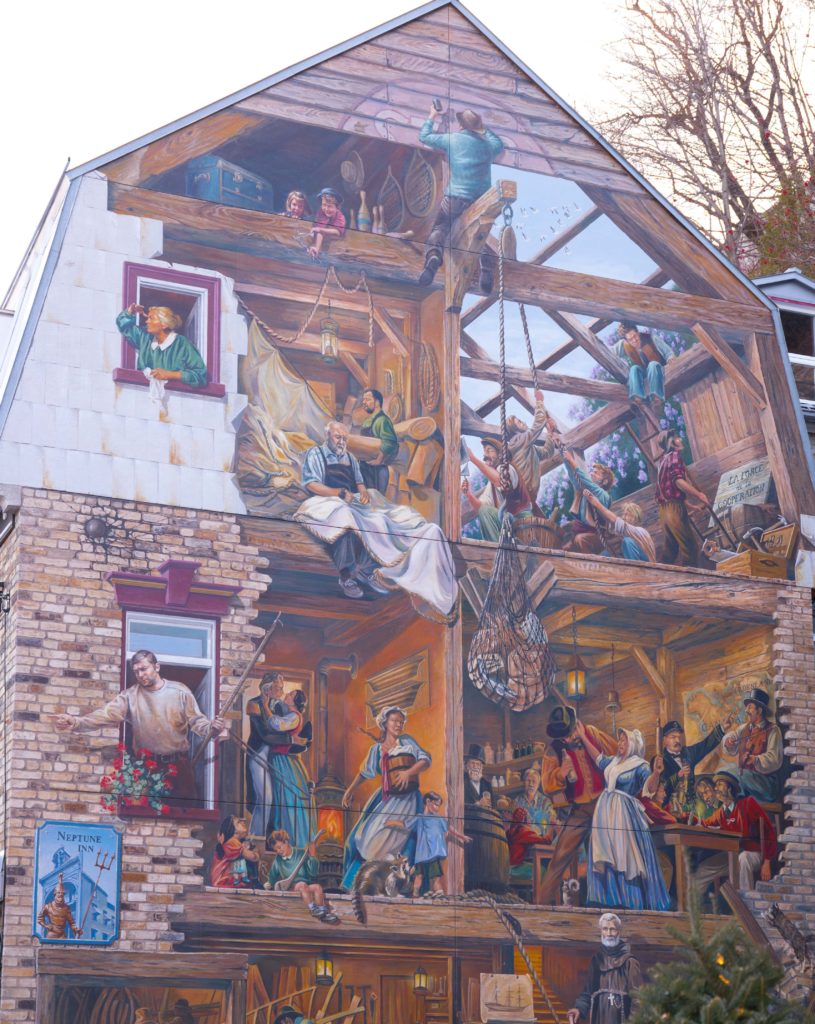 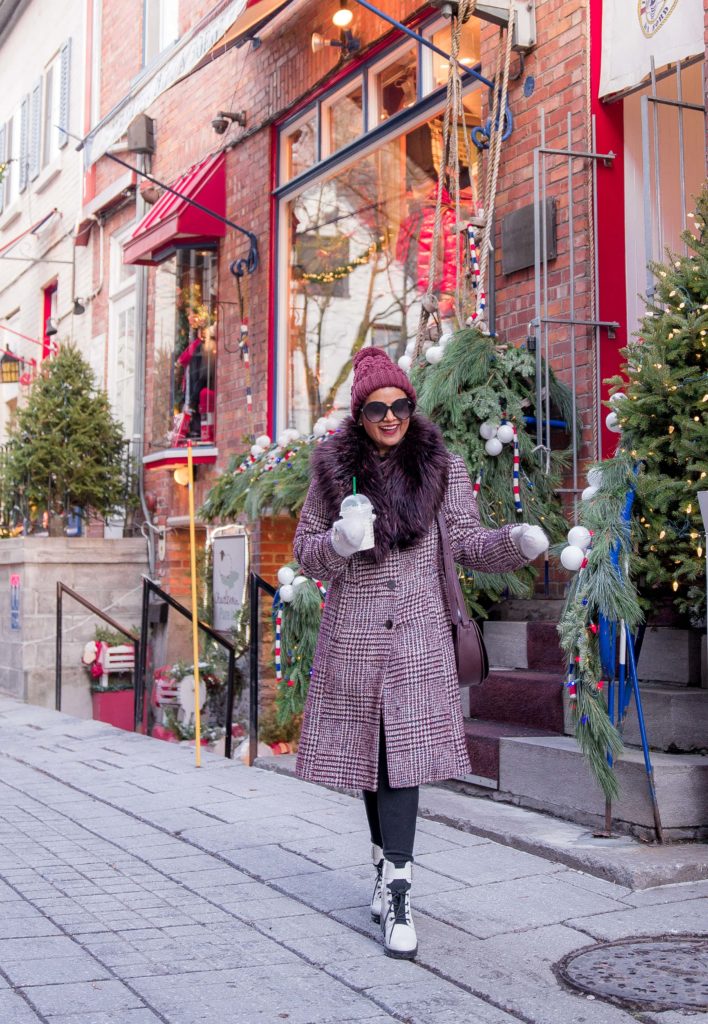 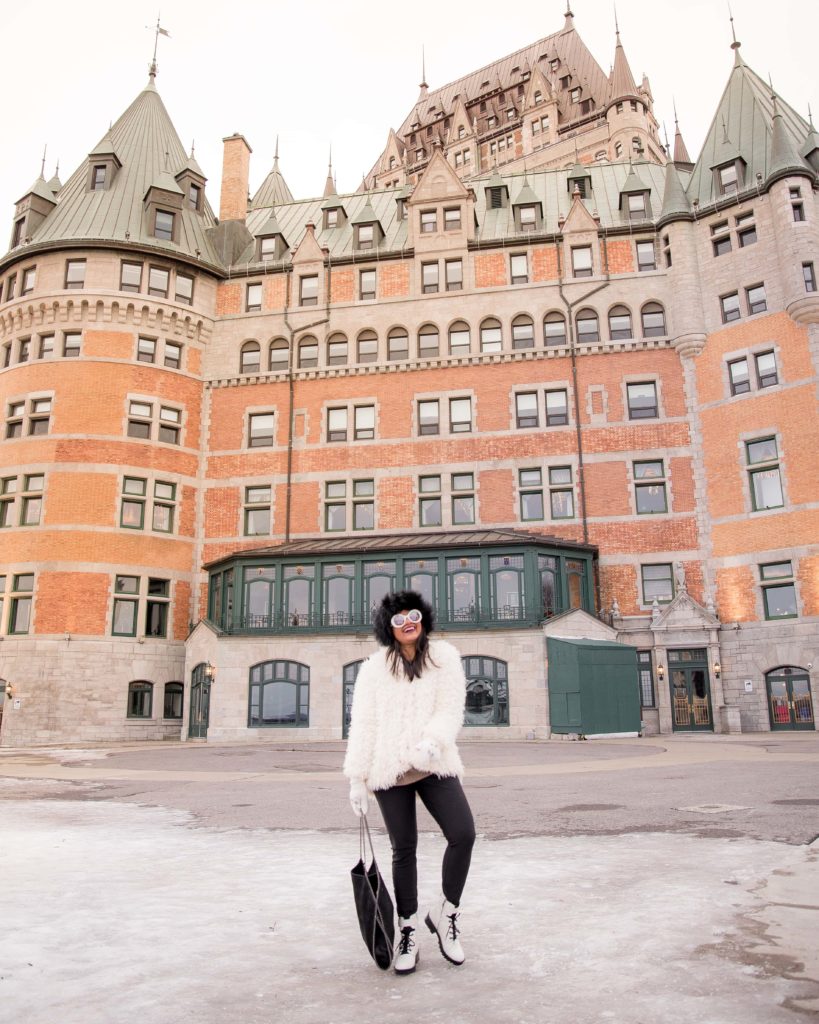 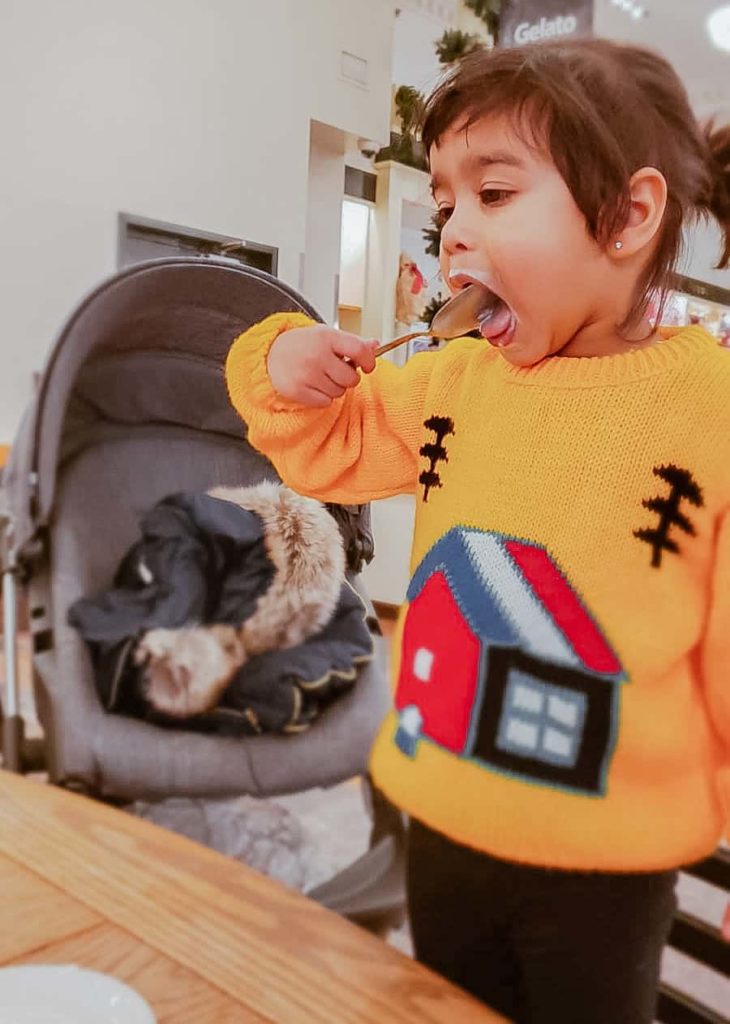 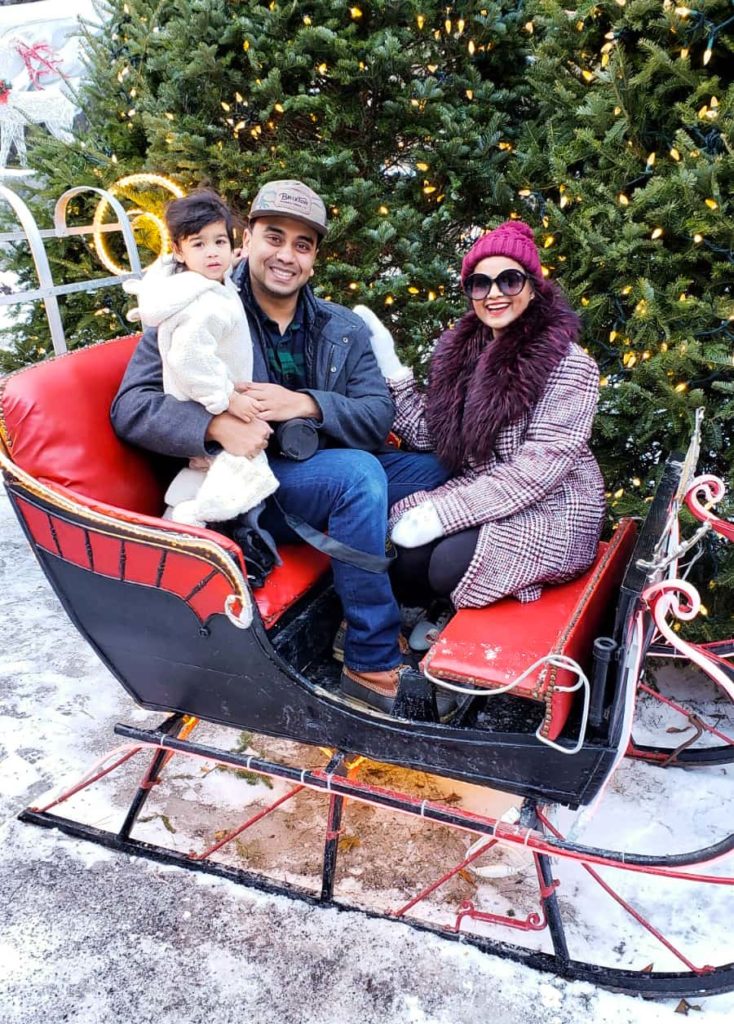 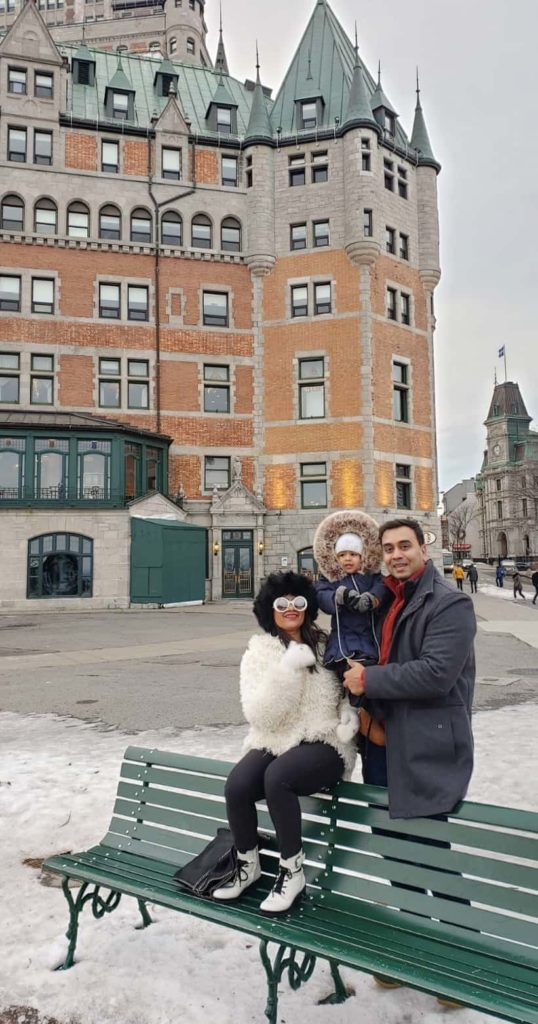 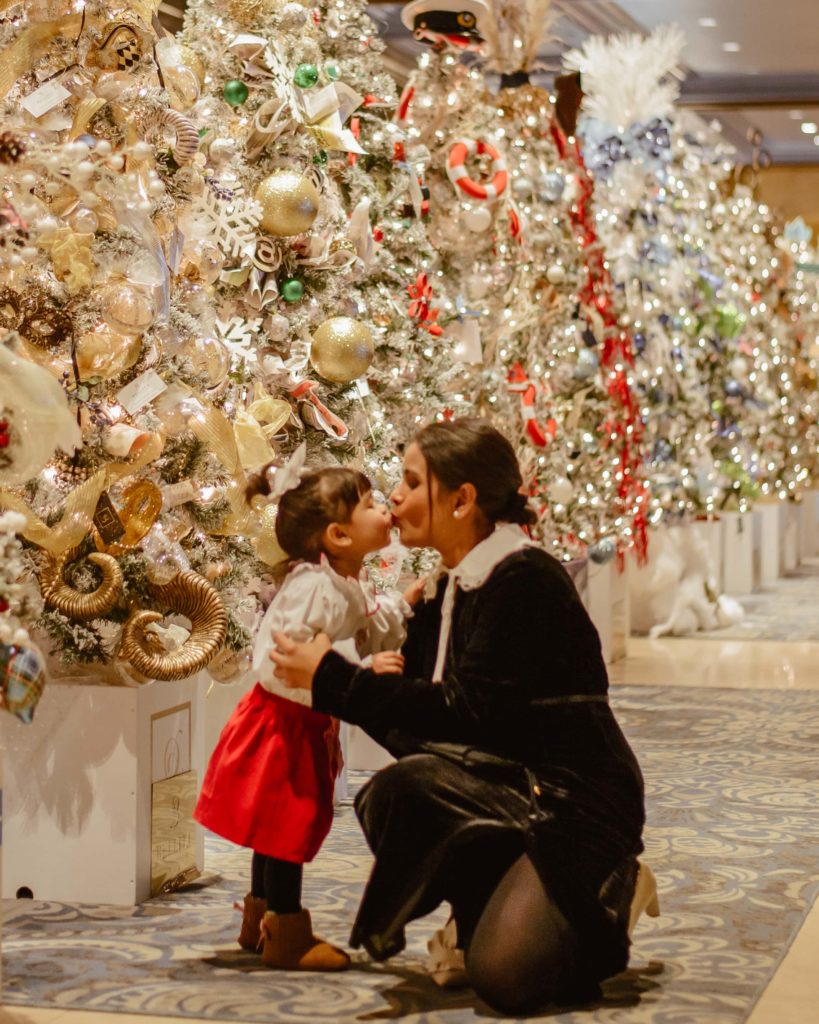 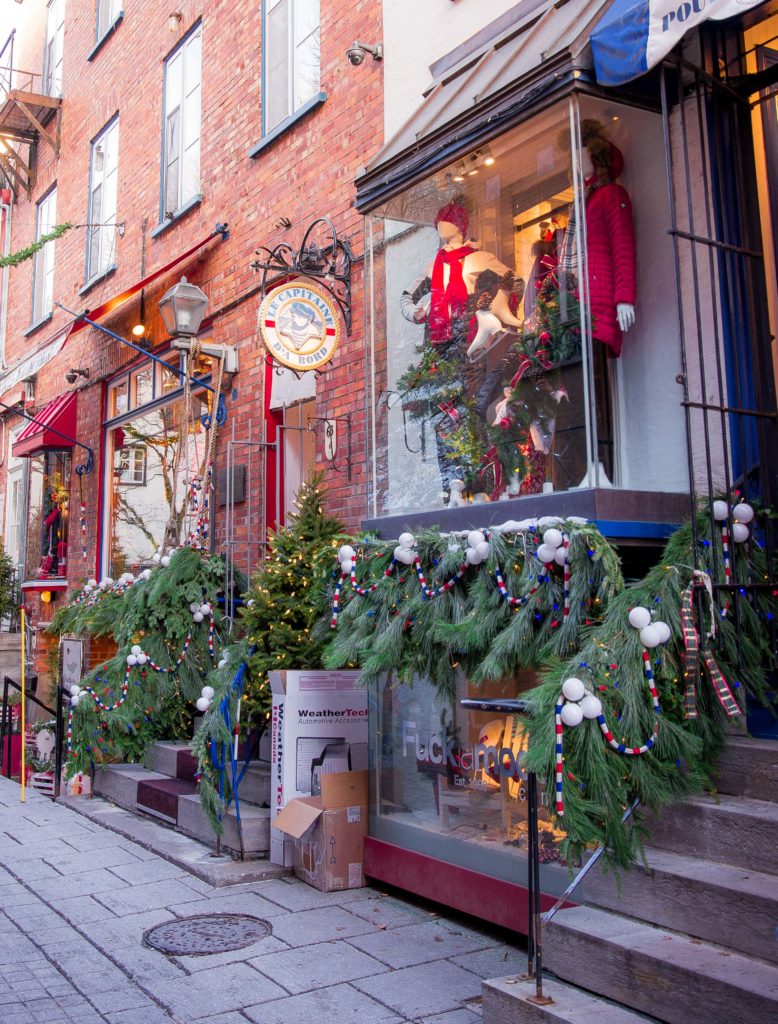 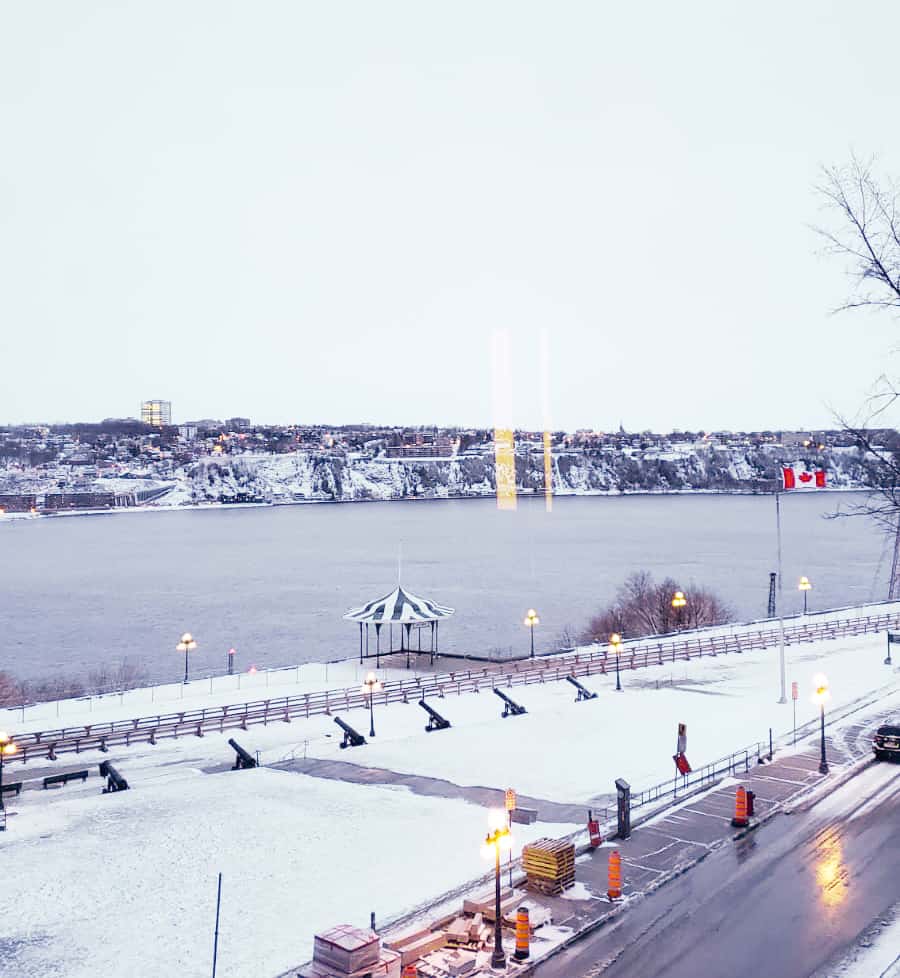 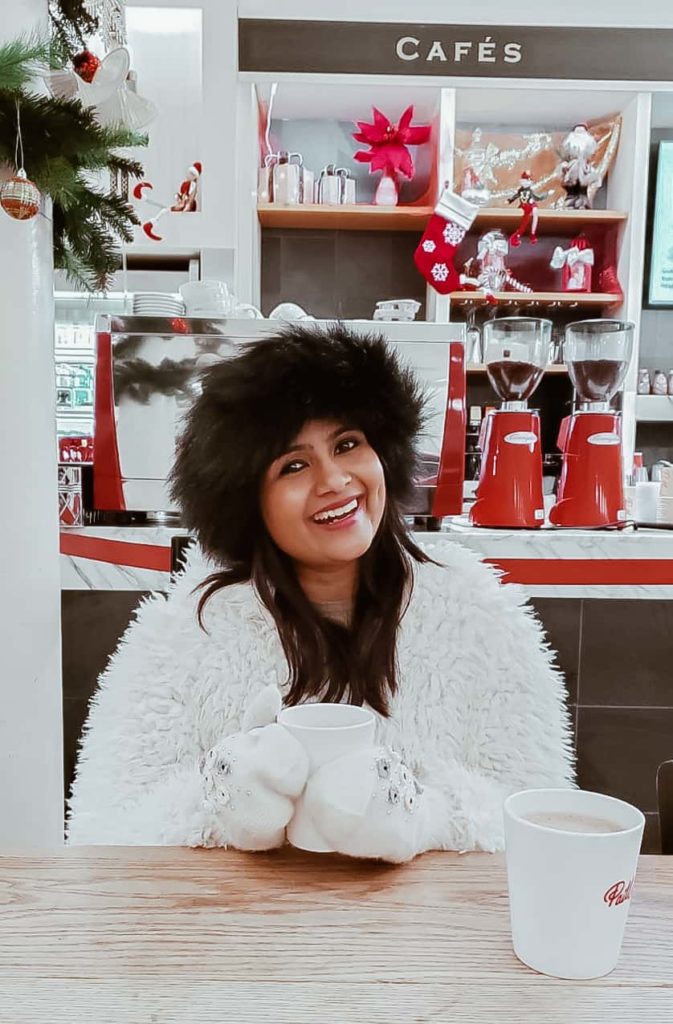 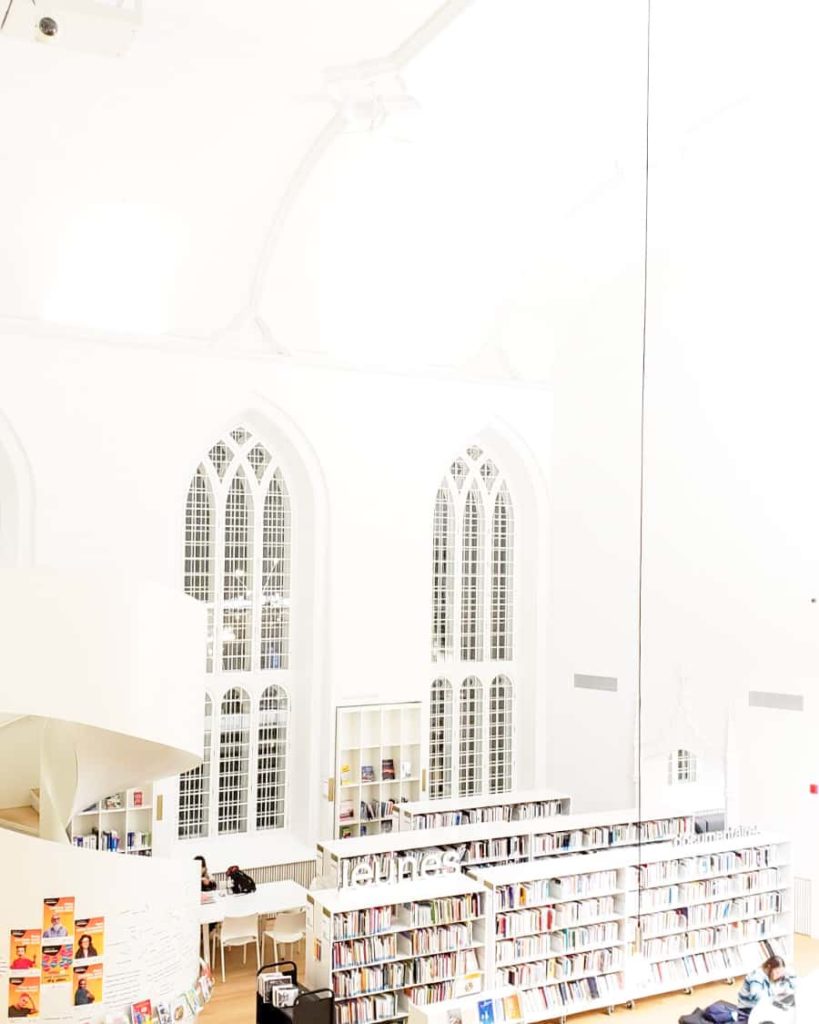 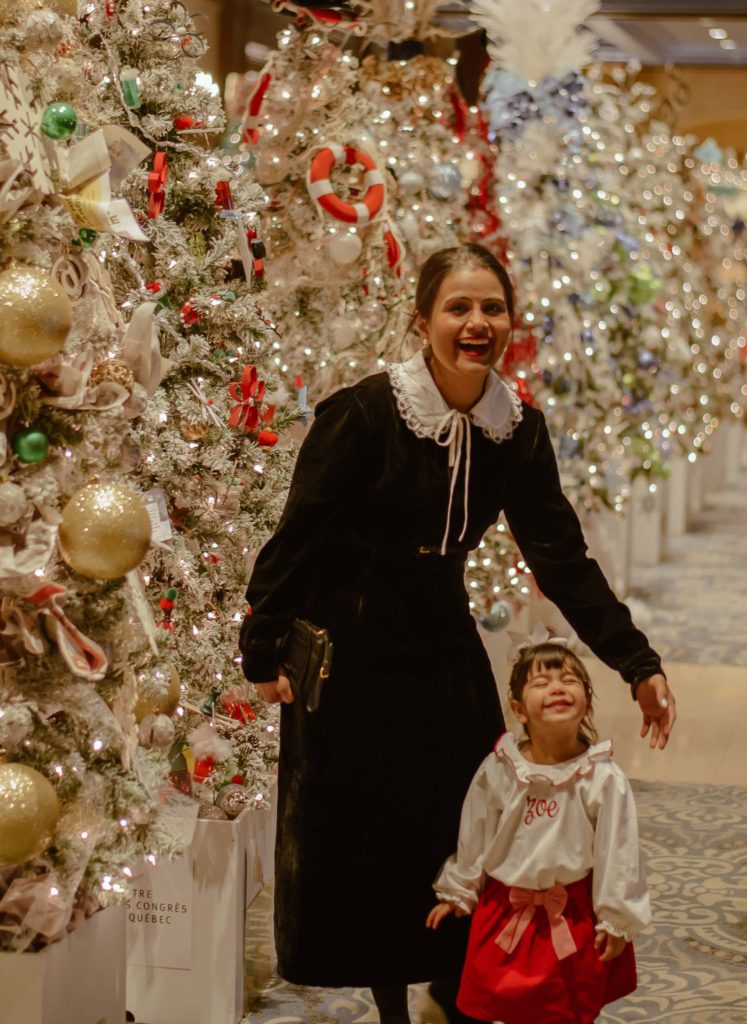 But yes, it was cold. Very cold.  So dressing up properly is very important, because you will be walking everywhere. Here is some of the cold weather gear and outfits that we use –

For myself, I have these thermal innerwear that I had picked up many years ago for a backpacking trip to South America in the winters – and I still swear by them. A thermal inner top and leggings that is lightweight but warm is a good base to start with for layering. The Spanx leggings are what I wear quite a lot during winters. A top or sweater and then a jacket is good. If it is walking in the snow, these snow-water-proof-fur-lined boots are my go-tos! I ‘ve worn them so many winters and they are have stood up so well – warm lined and waterproof. Living in Boston, I do have a few other boots that I would wear for style – but in the snow, there is no kidding. The right gear is a must. For the trip to Quebec, I took these chic combat boots – and they are so cute, giving a chic-skiing vibe, except I don’t know to ski but I could look the part for sure =)

For Zoe, making sure she is warm was the most important. These merino wool inners from LL Bean are great for layering. This fleece bunting is another one of my favorite piece, like a cuddly big bear suit. ( love dressing her up in this ! ) You can not go wrong with Ugg booties for fall or just in general when its cold, and for the snow we use these snow boots. These snow mittens and a snug cap to cover the ears ( although she hates wearing both – which baffles me because I could not walk without my gloves or cap even for a minute ! ) We took the Stokke stroller on this trip, because the wheels and its body is sturdy and built for snow/icy roads/all terrain which is great for New England area where we live and for rocky paths. For other travel ( for example – the trip to Disney ), we prefer the lightweight, foldable Chicco Bravo stoller. The stroller weather shield is great for shielding the kid in the stroller from snow/rain/wind.

Let’s talk about where we stayed, restaurants and things to do.

A few things to note – Not all restaurants  and streets have a ramp accessibility for strollers – so we had to carry the stroller a few steps many times. But a big shoutout to the locals in Quebec who were eager to help with lifting the stroller – genuinely nice and warm people everywhere we went. The funicular station doesn’t have an elevator either, so we had to carry the stroller in that flight of stairs. Also, a few restaurants do not allow kids – so be sure to check with them before you go.

Overall – we had a wonderful 4 day trip. I cannot recommend making a trip to Quebec enough – I am sure it is equally beautiful in the summers as well, but this time of the year it was simply magical.